I can’t remember the last time before this year that Bill and I hosted for Thanksgiving. But I’ll never forget the first time.

We’d been married just a little more than two years; we’d rented a table and some extra chairs to accommodate the 15 who were coming; and we were both registered to run the Thanksgiving morning Turkey Trot 5K. Enough about the easy stuff.

Wednesday night, less than 24 hours before we would open the door to both our families, we began preparing for the star of the show–an oven-roasted turkey. As 6 p.m. approached, I was up to my elbows in a kitchen sink full of warm water, unwrapping a nearly-thawed turkey, digging for the package of parts hidden deep in the “cavity.” Bill asked what he could do to help, and I asked him to start the oven preheating and gave him the recommended temperature.

In that kitchen set-up, the stove and sink faced each other, so my back was to the oven when Bill asked if it was supposed to “sparkle.”

Of course not, I told him, assuming he was making a joke.

In no mood for jokes, I turned around just in time to look through the oven window and see the bright-orange burner turning to black just behind the ball of sparks winding its way from one end of the burner to the other. Just like a lit 4th of July sparkler. I wouldn’t have believed it if I hadn’t seen it myself and, even so, I still had trouble believing it. How do you cook a turkey–much less, Thanksgiving dinner–without an oven?

Well, how we did it was to load up the raw turkey and its roasting pan and drive the six miles or so to Bill’s niece and nephew’s house. They were coming to our house the next day, so their oven was available. Even better, it worked!

All we had to do was return in about four hours to take the turkey out of their oven and get it and its hot pan and juices safely into and out of our car six miles later. Success.

Next morning, we went ahead and actually ran the 8 a.m. 5K, then came home and began trying to see how good a broiler was in place of an oven. The answer is not very, but between the broiler and the microwave, we managed.

Over the years since, we’ve done Thanksgiving in every way imaginable. At our house with a few people, a lot of people, just us, and away at the homes of various family members.

This year, we wanted to give our family members a reason to visit us in our new place in Chattanooga so we put the word out that would be hosting for Thanksgiving.

Not to whine, but I’m just being honest when I say that getting our new nest made has seemed like almost a second job ever since we moved here. After two unsuccessful attempts at buying bookshelves from furniture stores, we had built-ins made for a space that needed them.

We worked in the yard, installed pavers for the gas grill to stand on, planted bulbs, hung ceiling fans, hung curtains, hung sun-blocking shades on our back porch, wall-size printed a few of my photographs to hang here and there. Then came the big decision. 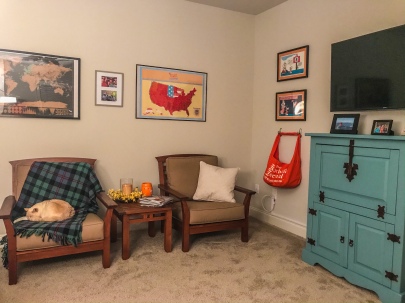 You can’t see surround sound, but sit here and you’ll hear it.

After putting it off since moving in, we went ahead and got surround sound installed in the upstairs “TV room” and family room downstairs that were pre-wired for it.

Seems like most weekends of 2019 were spent on one or more of the above.

Then, as Thanksgiving approached, there were weekends of extra-detail cleaning with the weekend before Thanksgiving devoted to grocery shopping and baking.

We were gonna have turkey AND ham and all the trimmings. We prepped and cooked on Wednesday, and we started again bright and early Thanksgiving morning. And unlike all those years ago in Knoxville, we decided to forgo the neighborhood run that morning. Experience has taught me that people who have time to go out and run a 5K on Thanksgiving morning either are not hosting, or they’re much better at it than I am.

Finally, 1 p.m. came and so did our guests. We had my parents and my younger brother and his wife; and Bill’s nephew and niece–of can-we-borrow-your-oven fame, and their son. We had loads of laughs–including at the life-size Darth Vader Christmas inflatable standing guard next door. Pam brought some amazing corn and my mother brought her homemade pecan pie that can’t be beat.

I have a new appreciation for my mother and all her years of hosting my entire extended family. Same as her, I wouldn’t have allowed my guests to clean the kitchen and I wouldn’t have gone to bed that night unless the kitchen was spotless. But that really took some doing. By the time we were finally finished, Bill and I both felt like we’d had our hands in dishwater since 1974.

None of our guests stayed over, so Friday was a day to rest and re-load for the second, but smaller, round on Saturday.

Bill’s daughter, Rita, and her son and daughter-in-law–expecting Rita’s first grandchild–arrived about noon Saturday. We’d cooked a couple of new dishes on the stove top and were able to fit most everything else, including the plentiful leftover turkey and ham into the oven to warm.

Then, guess what. Go ahead, guess.

We discovered the oven wasn’t working. No kidding.

This time it was a gas model, so no burner sparkling, but the stove is barely 18 months old! Same as more than 18 years ago, we still had a broiler, so there we were, warming the very tops of the piles of ham and turkey and zapping everything else in the microwave. Again.

I mean, what are the chances? Tell me how many times you’ve had people for Thanksgiving and how many of those times your oven died, and I’m pretty sure our ratio will have you beat.

Carrie, Jack, Bill and me, back row. Pam, Trey, Mother and Dad, front row. (Photo by Cecil, not pictured)

Still, it was special, both times.

My dad’s not in the best health these days, so I’m just glad they were able to make the trip. I don’t know how many more of those he has in him. My brother, Jack, and his wife, Carrie, were just on the eve of their first wedding anniversary. Cecil had visited Bill once before, but Pam and Trey hadn’t yet been here.

Rita had come to visit her dad for lunch a while back, but her son, Austin, and his wife, Melissa, hadn’t been here yet, and we hadn’t gotten to see them since she learned she’s expecting in February.

It was a great time, even if we do have the worst luck with ovens.