Ascending Mount Cammerer is one of my very favorite hikes in Great Smoky Mountains National Park. It’s also one of the hardest.

My first ascent was in 2010 with Bill and my brother, Jack, along. I’ve gone back at least four more times prior to this year.

In 2012, Bill, Jack and I were part of a group outing that included Carrie, who has since become Jack’s wife; Candace White, a former UT professor of mine; Nick Simson, a former UT co-worker of mine; and Hank Dye, the man who first hired me at UT.

I wouldn’t really have known about Mount Cammerer if it weren’t for Hank, who shares my love of the mountains and enjoyment of hiking. The 2012 hike came about three months after he retired from UT and as my boss.

In 2013, Hank and I were back, along with another recent UT retiree, Sarah Weeks; longtime friend of Hank’s–and fellow UT retiree–Dave Roberts; and Hank’s brother-in-law, Pat Morrison.

In 2014, it was Hank, me and Hank’s neighbor and hiking enthusiast, Steve Cook. The next year, Steve’s wife, Vicky, came along with Steve, Hank and me for the 2015 assault.

Every one of those involved a challenging climb, spectacular scenery, fun, fellowship and 12-plus miles roundtrip on foot. In 2016 and 2017, Bill and I went out west to visit some breathtaking, bucket-list, Rocky Mountain hiking destinations over four U.S. national parks and one in Canada. Our wow meters were well-worn, then came busy fall calendars that kept us from returning to Mount Cammerer in either of those years.

Why does the fall calendar matter?

Because that’s been our traditional Mount Cammerer hiking season, drawing us for the possibility of the patchwork of red, yellow and orange painted as far as our eyes can see from that high perch. Not to mention, the hike is tough enough without the heat and humidity of summer; nor the treachery of winter cold and icy conditions. Spring might be the lone good alternative to fall, but I haven’t tried it.

In the fall of 2018, we were just a few months into our move to Chattanooga–another super-busy time, not to mention the extra travel distance to Great Smoky Mountains National Park. But I missed making a fall hike up Mount Cammerer, and I resolved to get back there in 2019.

And, by golly, Bill and I just did that a week or so ago.

What is the draw to Mount Cammerer and its brutal climb, you may ask? 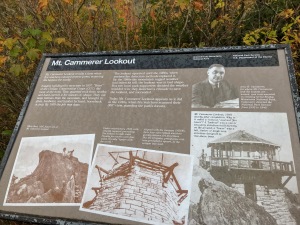 Some background: Mount Cammerer is a massive rock outcropping at 4,928 feet elevation near the Tennessee-North Carolina border that runs through the national park. You know you’ve reached its peak when you reach its fire tower, both named for Arno Cammerer, director of the U.S. National Park Service from 1933 to 1940.

The fire tower is one of those great products of the Civilian Conservation Corps between 1937 and 1939. It is one of 10 built by the CCC throughout the park in the 1930s. For the 30 years or so they were in use, a watchman lived in the tower for about three weeks at a time, until he was relieved by another watchman.

The towers had no electricity and no running water. A battery-powered, two-way radio was the only means of communication. Mirrors were used for signaling in the daytime and flashlights at night when the radio battery was dead. Fire towers on Mount Cammerer and Mount Sterling–about four miles away in North Carolina–are among the four that remain today of the original 10.

In addition to being a signature climb in the Smokies, Mount Cammerer has been called by multiple hiking experts “one of the best hikes in the Southern Appalachian mountains.”

Far be it from me to differ with the experts. 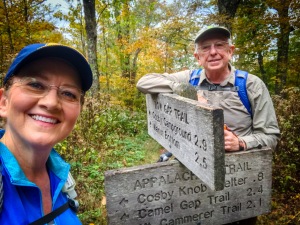 Same as every other time I’ve gone, Bill and I took the popular Low Gap Trail from the Cosby Campground in the park, near Cosby, Tennessee. The trail is a little more than 11 miles roundtrip and includes a 3,000-foot elevation gain over prolonged stretches of rocky surface. It’s strenuous and not for beginners. This year made almost 10 since Bill’s last–and only–climb up Mount Cammerer. He told me he might have to sit out part of it, or not go all the way to the top.

Spoiler alert: he made it.

The fire tower has a lookout deck about one story higher than the trail surface, and you can clamber onto it via a rock scramble. It wraps around the structure, offering the possibility of a 360-degree view of the mountains and ridges spreading out below.

I made our October hiking plans back in February of this year. When the possibility of fall color during the traditional third week of October peak in East Tennessee seemed a safe bet. Then came triple-digit high temps in the summer that were still hanging around into the first week of October. Leaf color is set in motion by clear days and cool nights. Not enough of those had happened to bring fall foliage into technicolor focus by the time of our trip to the mountains, but what were we going to do? Not go was not an option.

After I had sat down to and eaten a full breakfast–something else I’ve never done before hiking Cammerer, or most any other hike. That’s because: 1) I was on much-needed time off with an alarm clock ban, and 2) our cabin was only 30 minutes from the trail head. Much closer than the 90-minute drive we used to make from our house in West Knoxville, to say nothing of the idea of driving there from Chattanooga.

The forecast called for spotty showers–not the weather I would have chosen, but not a reason not to go. We took rain gear but didn’t really need it until we were almost off the trail after 12 miles and change. Temps were pleasant and hints of color were beginning to appear. There was the one constant: 3,000 feet of elevation gain during five and a half miles of climb.

For all his self-doubt, Bill did remarkably well. We both plugged away for the first three miles or so–unrelenting up–until the Low Gap Trail ran into a section of the Appalachian Trail that continues on toward the Mount Cammerer Fire Tower. Reaching the Appalachian Trail there means you have reached the end of the most difficult part of the hike. Woo-hoo! We planted ourselves on some sitting rocks and had a snack.

The rest of the way is shorter than the way you’ve already come, but you’d swear otherwise as you hit yet another little rise, another little meander through some woods, another step up some built-up steps. It must seem shorter in my mind than it is because it’s so much less steep than the three-mile ascent it follows.

When we finally reached the fire tower, we clambered up the rock pile to reach the observation deck, and I was surprised to find the door locked to the interior room surrounded by the deck. 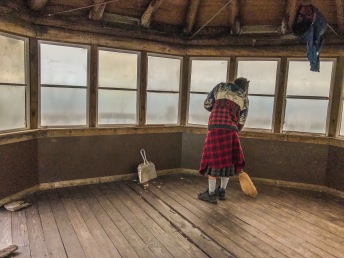 I jiggled the handle a little, and a young man inside opened the door. He said he is a UT Knoxville student (the campus was on fall break at the time) and forestry major who enjoys visiting the fire tower.

He had a straw broom in his hands and he said he was just sweeping up the mess he’d made. FYI, neither the fire tower nor that publicly accessible room are for “camping.” I can’t tell you the student was camping or contemplating doing so, but I can tell you I’ve never encountered a person dancing with a straw broom up there before. Nor have I ever seen a broom anywhere at the fire tower before.

Oh, well. He was a bright, charming kid, clearly and he asked lots of good questions about hiking in the Smokies and about UT Knoxville. It would be good for forests if he ends up in forestry.

After about an hour to eat the sandwiches and snacks we’d brought for lunch, and hearing the start of a shower, Bill and I bid our future forester friend adieu and hit the trail.

We made great time and almost the entire descent without a mishap. But it did get a little dark toward the end–we were back to our car about 7:30 p.m.–and the increasingly heavy rain created some slippery spots. One of those caused Bill to take a spill. Mostly just a loss of balance, no severe crash. We were both ready to be off our feet, though.

It did us both a lot of good to get back up there. Bill surprised himself at being able to do more than he expected he could. And I love going up Mount Cammerer because it is part of one of my favorite good news stories, ever.

The fire tower was restored in 1995 with funds donated by the non-profit Friends of Great Smoky Mountains National Park. The group organized in 1993, and the fire tower restoration is the first project it funded.

Sadly, vandals—who I don’t even understand being among hikers—have in more recent years damaged the structure again. The North Carolina chapter of the national “Forest Fire Lookout Association” has come through with a $500 grant to Friends of the Smokies to repair the damage.

Because Mount Cammerer has a lot of friends throughout the Smokies. Including us.