‘Tis the season: As a year winds down, lists pile up.

Best moments in sports: Way too subjective–forget that.

2018 has been a game-changer for me with a list of blessings way longer than I deserve, but I took ’em all and I’m still grateful for every day of every one. Besides the tendency to take stock as a year comes to an end, one of the reasons I find myself trying to count my blessings is one of my new year’s resolutions for 2019: Be grateful.

It’s a thought you may recognize,”In every thing give thanks…” from 1 Thessalonians 5:18. I have found it’s also a fact that gratitude can change your attitude, your perspective, your outlook.

I encourage you to join me in a renewed focus on gratitude for all things, those you may have hoped for and those you didn’t. Because one thing I’m grateful to have learned anew in the last few years is that there are lessons in every experience, good and bad, and I’m working on trying to be better at learning from all of them.

Gratitude also helps me with patience–never one of my strong suits. Such as, being grateful even in disappointment for whatever the plan is that made the disappointing outcome the right one…at that time.

To kick off a 2019 of gratitude, without further ado, here are the (roughly) 18 top moments of 2018 for which I’m most grateful. They’re also in no particular order because it would be impossible to rank them–all being so special and important to me.

Bill and I moved from Knoxville to Chattanooga in June, when I began serving as the UTC assistant vice chancellor for marketing and communications. It’s been a great opportunity for me and I’ve joined a team that is talented but doesn’t take itself too seriously, that works hard but has fun doing it.

Sold a house, bought a house

After months of hard work getting our Knoxville home of 24 years ready to go on the market, it sold the first day it was listed for sale.

With closing set for 30 days later, we had to find a place in Chattanooga that we could also close on in 30 days and get our belongings moved into by roughly the same time. That was the single-most stressful 30 days of my adult life, but it ended with us finding and moving into a new house that we love.

Did I mention that during the most stressful 30 days of my life, we went ahead with longstanding plans to spend two nights in Nashville and sit in the two great seats we had to U2’s May concert in Bridgestone Arena?

We did. And it was the second time we got to see U2 in less than a year–in 2017 we saw them in June in Louisville for the 30th anniversary of The Joshua Tree album. In 2018, they had a whole new album of songs to perform in Nashville and as incredible a show to put on as they did in Louisville.

Dylan in Chattanooga: Just a Wink Away

As long as he keeps touring and I can afford the tickets, I’ll be smiling down front whenever Bob Dylan is playing. I’ve seen him several times and in multiple cities but, after moving to Chattanooga, 2018 brought my first date with him at the Tivoli Theatre.

Shortly after I began the new job at UTC, the single-largest private gift in the University’s history–$40 million–was made official and was to the College of Business by one of its obviously most-successful alumni, Gary Rollins, and his wife, Kathleen. In September, they were the guests of honor for a day of festivities to thank and celebrate them for their generosity. Busy people like that always have tight schedules, but they were willing to sit with me for an interview that would make a feature in the UTC magazine, online and in video. They were kind, gracious and unassuming, and talking with them will always be a career highlight for me.

You don’t think UTC would be a university in the heart of Chattanooga and not have its own Choo Choo, do you? It does, and throughout football season, the Choo Choo rolls up and down parking lots and tailgating areas around the stadium, tunes (including the one for which it’s named) wafting from loudspeakers on the “train engine” and people in school colors handing out swag. Turns out, my new office is responsible for driving the train and sharing the swag. Which Bill and I got to do one Saturday in October as my colleague, Shawn Ryan, drove us between the cars and, unfortunately, over a “corn hole” game set. Can’t be playing when the train’s coming, kids–but no injuries were sustained in the destruction of the game set, which has since been replaced with its owner, by the way. Once Bill came out of his shell, he enjoyed the opportunity to socialize.

I was there from “Day 1” on Jan. 3, 2011 for now-retired former UT President Joe DiPietro. Even though I had moved on by the time he announced his November 2018 retirement, I got to reunite with former co-workers, old friends and with Joe and his incomparable wife, Deb, at a really nice party to celebrate him and their move to be closer to children and grandchildren in Illinois. Bittersweet to see him step down, but the evening of catching up and seeing people I hadn’t seen in months but used to see every day was a highlight of the year.

My new friend on the Tennessee Supreme Court

Speaking of my old job, almost every year in January when the governor gives his State of the State address, I would join the UT president in traveling to Nashville for the speech. In 2018, riding along with us was–no kidding–Tennessee Supreme Court Justice Sharon Lee, who lives in Madisonville. She and I hadn’t met before that evening, and the travel time gave us opportunity to become acquainted. Justice Lee is remarkably gracious and a very interesting person to get to chat with. We have since found each other on social media, and it makes my day every time I get one of her thoughtful and kind acknowledgments there. I’m also looking forward to the next opportunity I have to spend time with her and hope to make that possible by engaging her in something she generously commits her time to: encouraging and enabling effective young people, especially young women students.

The Knoxville News Sentinel is what brought me to Knoxville in 1992. It’s the place where I cut my teeth, professionally, when my career began as a reporter there. It’s also where I made some of my oldest and best friends, a sorority of  journalists. Today, 1992 is a long time ago in more ways than one–not least of which is what has happened to the print news business since then. Last January though, it was time for News Sentinel Ladies Night to bring us back together. I loved, loved, loved catching up with so many special women friends–part of what I always describe as the best people, “newspaper people.” My first editor, Jan Event; Margaret Bentlage, the photographer who covered and captured and traveled with me to Sweden and back on what was voted by AP the biggest story in Tennessee in 1997 (the Lillelid murders); Idonna Bryson, our office manager; Vivian Vega, the expert copy editor; the incomparable Georgiana Vines, who hosted us in her home; and a dozen or more other good, old friends. I’ll be back in Knoxville the next time there’s a Ladies Night.

My brother got married, y’all!

Most people who know us both know that my brother Jack is at least as much a favorite friend of mine as he is my younger brother. He’s been single virtually all of his adult life and, until he started dating Ms. Carrie Thompson about six years ago, he may have intended to stay single. This fall, though, he proposed to Carrie, so then the question was only one of how long the engagement might be. They answered that in one of the most-successful surprise weddings ever, on Dec. 1, when Bill and I were asked to come up for a party “to see their Christmas decorations.” Only my (and Jack’s) parents and hers were on hand for the civil ceremony in Jack’s living room. When Bill and I, among the first to arrive, walked in, Jack said they had a surprise to tell us about. Understatement of the year. Welcome to the family, Carrie!

Speaking of family news, one of Bill’s twin granddaughters–both of whom I’ve known and been fortunate to have spent extensive time with since they were 4–is now expecting her first child. A boy, due May 31st.

We were there for her wedding to Donovan Lankford in March 2017, and they have been nothing but two peas in their happy little pod ever since they got married. Now, the pod is about to get a little bigger when Baby Boy Lankford arrives.

One of the biggest news stories in East Tennessee for decades, in November the unfinished segment of the scenic Foothills Parkway through the Great Smoky Mountains was finally completed and opened to the public. This is a federally funded road project that, literally, has been on again, off again for decades. As a reporter in 1995, I even covered a press conference with Tennessee’s U.S. Sen. Jim Sasser and Transportation Secretary Federico Peña in which both said the “missing link” would be built. They didn’t say it would take 23 years, but better late than never, I guess.

Bill and I took in the stunning drive over Thanksgiving weekend. If you’re ever in the area (near Walland, Tennessee), you should, too.

More from the Mountains

Much as I love me some Great Smoky Mountains, it’s no surprise that multiple of my best 2018 moments originated there.

Overnight on LeConte: In October, we had the rare and exceptional experience that is hiking to and staying overnight on LeConte. The fact it doubled as a reunion with eight friends from where we attended church in Knoxville for many years made it even more special. 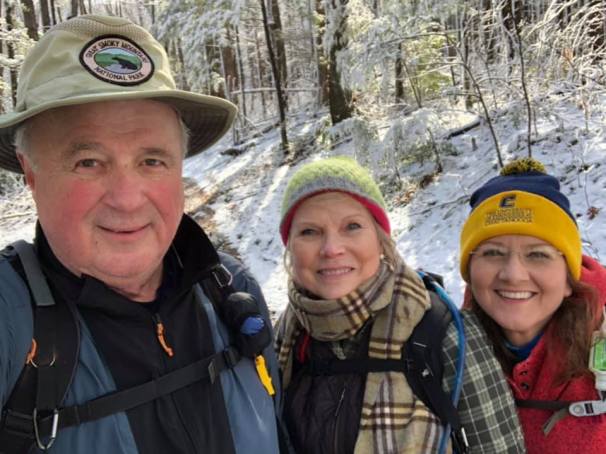 White Christmas: OK, so it was December 22, but there was snow on the trail and it got deeper as we got higher when Hank and Margaret Dye and I hiked the Anthony Creek Trail from near Cades Cove. Snow is always iffy in Tennessee and there’s no guarantee of it showing up at Christmastime, but it was there that day, and so were we.

Kicked off 2018 the right way: If you know me well, you know my story of my beloved, late Granny who always held that “Whatever you do on New Year’s Day, you’ll do all year long.” Though I know it’s just superstition, I can’t not try to follow her thinking on New Year’s Day, which is to try to have the best day possible to get the year off right.