I am fortunate to have been blessed with two grandmothers who lived well into my adulthood. In our family, each was called “granny”–a good ol’ Scottish appellation of Appalachia. Unfortunately, my paternal grandmother, Ruby Stafford, died in 2010. Followed by my last surviving grandparent, Allie Cantrell, who died in 2014.

I remember Granny’s New Year’s Day superstition most of all, and it said whatever you do on that day is what you will do all year long. So you didn’t want to be sick, or sad or argue. You wanted to have the best day possible, preferably doing something you would love to do the entire year.

Most of my friends know that I approach New Year’s Day with this in mind, seeking to set the tone for the whole year ahead. Since hiking is a love of mine, I’m always looking to have a great time doing that on New Year’s Day, and with old or new friends, or both.

New Year’s Day 2018 was just such an opportunity.

My friend, Hank, rounded up about a dozen hiking enthusiasts, and my husband, Bill, and I joined the group with a big Yeti jug of hot chocolate.

Temperatures were in the teens as we met up at 9 am just outside Great Smoky Mountains National Park in Townsend. For whatever reason (there was no snow on the ground and the roads were clear and dry), the park was closed to vehicles. So we parked ours just outside the gates at the Townsend Wye, where there is a modest-sized swimming hole on the Little River–more to come about that, later.

Snow flurries danced on a sharp little wind as we walked up to a pretty landmark, a tunnel on Little River Road. Twice on what was less than a one-mile stretch of road, we were passed by a Park Service snow plow truck. The plow was scraping nothing but the top-most layer of asphalt on the dry road and spreading a thin veil of sand behind it.

The little tunnel was decked out with some of the most impressive icicles I’ve ever seen. Before we could fully inspect them, we had to move to the shoulders of the road again–this time for a park ranger vehicle escorting a convoy of campers from Cades Cove Campground and out of the park.

After the requisite photos, we turned back. Some headed for their parked cars. Others of us turned down Tremont Road when we reached it, intending to go to a scenic bridge over the Little River and look for otters in the water. 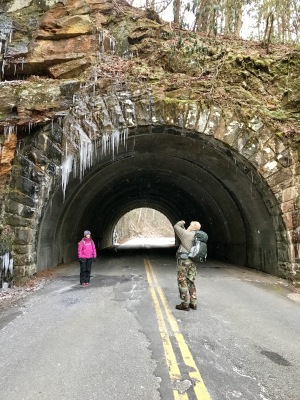 People-sized icicles
No otters, but by that time several of us were feeling the need to make water. The morning coffee and hot chocolate were posing the challenge of needing to answer nature’s call when covered in three or four layers and temps only in the upper teens. I think the men were able to work it out. I and the other women decided to wait for plumbing.

Back at the Wye, a small party was forming. We saw towels and people in sandals gathering possibly to contemplate the swimming hole.

I’m confident the only difference in that water between New Year’s Day and the middle of August is that there was some ice on top yesterday. No water anywhere in that park is ever at a tolerable temp for humans.

Which is why I didn’t believe it when someone suggested maybe the gathering party was there to jump in the swimming hole. But I was wrong.

As long as we were there, we figured we might as well get our first in-person viewing of a Polar Bear Plunge happening right before our eyes.

No, in case you’re wondering, there is no way I would ever be tempted to jump in with the Polar Plungers. I don’t do mountain streams even in the hottest weather. 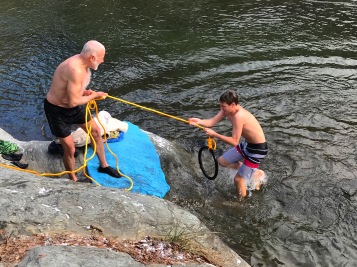 If somebody told me I had to strip down in 15 degrees and jump from a rock into the Little River in January, I’d tell that person he would just have to shoot me.

I don’t know if the Plungers are hoping to spend the rest of 2018 defying death, but I do know I had a great day. I was with great people doing something I greatly love. I really hope to do that all year long. 🙂