Stump Jumpin’: A Lesson in Limits 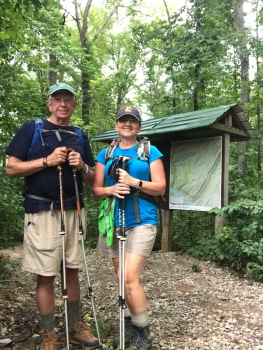 Some hikers have no trouble deciding, from the trail, that it’s not the day or the time or the right conditions to finish. I’m not one of those hikers.

I tend to press ahead under almost any circumstances. I’m there, I can do it. I’ll push myself, if that’s what it takes.

Last Saturday, I made the rare-for-me decision to find a shortcut, take it and bail on the original planned route. I also found myself thinking I needed to get out with the Chattanooga Hiking Club at first opportunity because I’d had about enough of trial-and-error trails.

I really miss the benefit of hikes organized by people who know routes, distance and conditions well. I often had that within a hiking squad I was part of before moving to Chattanooga. Still relatively new to the hiking options in the area, I’ve done a fair number of hikes for the first time that all my information about came from online research or conversations with other hikers. That’s worked out well many times, but it’s also left me underwhelmed a few times and just a tad overwhelmed last Saturday.

Which brings us to the “Rock Creek Stump Jumper” hike.

The “Rock Creek Stump Jump” actually is the name of what has become one of the premier trail running races in the Southeast. Organized by Chattanooga’s own Rock Creek Company, the race is presented in September or October every year as either a 50K or a 10-mile trail run.

I’ve seen it referred to as “the Beast of the Southeast.” A 50K, by the way, is 30 miles. And 30 miles is four more than a marathon. On mountain trails. Those people are tougher than I will ever be.

I’m grateful to them, though. The event raises tens of thousands of dollars every year for work on hiking trails around Chattanooga. 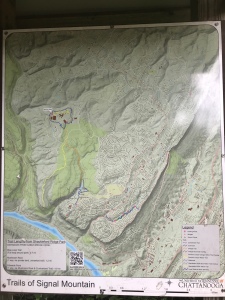 While looking for a place to hike without necessarily having to drive far to find it, I happened upon the roughly 10-mile route the Stump Jump event uses. I found it on the All Trails app by searching for hikes in the Signal Mountain area. “The Rock Creek Stump Jumper” is rated as moderate for hiking–for trail running, it would be a moderate beast.

It began where the trail running event does every fall, right next to Signal Mountain High School.

The Cumberland Trail is a 300-mile network of hiking trails that stretch from the northeastern corner of the state south to end on Signal Mountain at Signal Point Park, part of the federal Chickamauga and Chattanooga National Military Park areas.

Then there’s Prentice Cooper State Forest, 6,000 acres of protected land with 35 miles of hiking trails. Prentice Cooper is almost entirely in Marion County, but it reaches east into Hamilton County where it crosses Suck Creek and goes up to the popular and picturesque overlook Edwards Point. That’s why so many Prentice Cooper trails are accessible from Signal Mountain.

The 10-mile Stump Jumper route overlaps trails within two of the three trail systems on Signal Mountain. It’s a designated loop that begins and ends at a well-marked access point just below Signal Mountain High School.

Both the 50K trail-running route and the 10 mile route I chose begin on gravel trails in another local park on Signal Mountain. Within a mile or so, I was heading south, clockwise on the loop, and into an arboretum.

And I was solo. Bill wasn’t up for double-digit mileage, so he began with me but soon took a detour for a 3-mile route. He would plan to kill some time otherwise exploring and wait for me back at the trailhead since I was making a loop to return there.

Saturday was plenty hot–a forecast high of about 95. I wanted to hike on Signal Mountain in hopes its slightly higher elevation might offer slightly lower temperatures. The rule of thumb that you see a drop of about five degrees for about every 1,000 feet of elevation gained meant that I might expect a fresh 88-90 degrees on Signal Mountain, at best.

Regardless, it was hot. And humid–I’m talking soupy air. Have I mentioned I really dislike hot weather?

Within another mile or so, I was out of the arboretum and into the woods. Just regular woods. Just me on a pretty, peaceful and textbook woodland hike over gently rolling terrain for about three miles or so.

Other than Bill until we split up, the only other hikers I’d seen so far were a couple finishing as we started. They warned us that the insects were aggressive and out in force. Oh, yay. I wouldn’t hike in the woods without bug spray any more than I would hike without shoes.

The hiking couple may have understated the presence of the insects, though. I fumigated myself top to bottom–especially on the visor and top of my cap–with a can of bug spray at the car. I put the can in my pack. About 90 minutes into the hike, I had to re-fumigate. Never mind how much my cap already reeked of bug spray, within 30 minutes or so, I had mosquitoes darting at my face and whining in my ears.

About that time, I got my first indication that this was a multipurpose trail, indeed. Temporarily blinded by a bug spray fog, I heard what I thought might be a chainsaw. The fog cleared just in time for me to see that the engine sound was coming from a dirt bike, coming right past me. Ah, the sounds of nature.

Not to be outdone, mountain bikers also showed themselves on the trail.

In making the loop clockwise, I was going against the trail reviews. The reviewers’ consensus was that counter-clockwise is preferable so that you’d begin with a descent and finish out with gently rolling terrain.

My reasoning for clockwise was based on more than one hiker also reporting the route was easy to lose in parts of the last half of a counter-clockwise direction. To me, getting lost is a much bigger deal than having to climb, so I intentionally began my loop with the trickier half of the route where some of the trail markings aren’t as prominent.

The All Trails app on my phone makes it possible to basically check my location in real time, and that came in handy several times in the tricky half of the route when it was, in fact, difficult on more than one occasion to clearly identify the path.

Doesn’t that assume you’re hiking with your cell phone on you and have wifi, you ask?

Why, yes, it does. And wifi on a hike is more the exception than the rule, in my experience. In this experience, it was what kept me from going down the wrong trail several times.

Oh, and the availability of wifi also made it possible to check the weather conditions, which I did because conditions I was experiencing were so unpleasant. The combination of heat and humidity made for a heat index of 99 degrees. Until the sky darkened and a good breeze began blowing–and making the trees deep in the woods groan against each other.

I welcomed the fresher air and remembered I had not brought a rain jacket or poncho. Back at home, it was so ungodly hot and humid–and sunny–I couldn’t imagine needing rain gear or being able to tolerate putting it on.

Turned out, that breeze and darkened skies were short-lived, along with the respite from swarming mosquitoes. And the heavy dependence on the cell phone to track my location was heavily draining the phone’s battery. Fortunately, praise be, I was soon in some familiar territory I’ve hiked in the past to some scenic vistas. I shut off the phone and began looking for a good place to eat lunch. Then the sky darkened again. Less breeze, that time. The weather cut straight to thunderstorm before I had the chance to find either a place to eat or shelter from the rain.

I found a small thicket of rhododendron and rock outcropping and took a seat. The rainfall had lightened up and the foliage was doing a fair job of blocking some of the rain. As I ate a sandwich and watched two different couples of hikers walk by and do a double take–both times–when they spotted me, I thought about how this outing hadn’t been my favorite, so far.

The rain ended about the time my food did, so I started back up again and realized, oh yeah, there it is, the up. I was into the latter half of the loop now and the climb I’d opted for over the risk of getting lost when tired and near the end of a 10-mile hike.

The sun popped out, turning all the recent rain into steam. I reached one beautiful overlook, Signal Point; then another, Edwards Point. My bandanna was soaked from mopping my brow.

Between the rain and my sweat, in fact, I was damp-to-wet all over. My weather app said it was 99F in Chattanooga. It was about 3:30 p.m. and I was a bit more than halfway around my 10-mile loop. I had only just in the last mile or two emerged from the jungle to some scenic views and would be now heading back into the jungle–and up.

I decided I’d had about all the fun I could stand.

I consulted my map and decided to take a detour, definitely uncharacteristic of me, but I decided this time was warranted by the circumstances. Plus, I still had cell signal and about 25 percent battery, so I could reach Bill and give him an update on where to pick me up. Without that, I wouldn’t have had the option to change plans.

A Prentice Cooper trail on my map would make an almost diagonal retreat to almost the start of my loop, but it would not climb, not involve stepping up large rocks and would keep me from going back into the jungle. All without losing more than a couple of miles from the total–which mattered only from the standpoint of the day’s hike turning into pretty much just a good exercise opportunity.

All in all, I still got in about 10 miles and I’m confident I made a prudent decision about where those miles were.