Face to Face with the Fiery Gizzard

The name is colorful, the reputation is intimidating, and the location is way off the beaten path.

And, as of Saturday, I can say I hiked the Fiery Gizzard Trail–and lived to tell the tale. 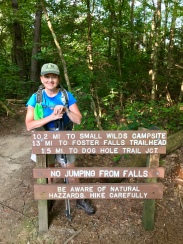 The Fiery Gizzard is a 12.6-mile gash down the middle of the South Cumberland State Park. The park is made up of 40,000 acres that lie within four different Tennessee counties: Grundy, Franklin, Marion and Sequatchie. At its southernmost tip, the point-to-point trail ends at the Foster Falls area owned by TVA.

The hike I did is a 9.6-mile loop that begins in Grundy County, at the Grundy Forest State Natural Area picnic shelter. Raise your hand if you’ve ever been to Tracy City. Driving from Chattanooga, it took only about an hour to get there.

No surprise that one of the most popular stories about the trail name says Davy Crockett had made camp along the creek and was eating turkey being roasted on an open flame. He bit into a gizzard that was so hot it burned his tongue. The story goes that he spit it out and into the gorge saying, “Curse you, fiery gizzard!”

Kind of a “Davy Crockett spit here” claim to fame.

In the hiking community–and I mean nationally–the trail has achieved its own fame, beyond the memorable moniker.

The Fiery Gizzard Trail is ranked by Backpacker magazine, Outside magazine and the outdoor-centric Roots Rated website as one of the top 25 hiking trails in the United States. Right there in Grundy County.

Why? It offers a diverse combination of scenery, waterfalls, massive rock formations, bluff overlooks and steep, technical climbing or descents.

People have told me about the Fiery Gizzard for years, usually in the context of: Be sure to leave word of your planned route so that search-and-rescue can find you. No kidding.

I’m not sure it could have been as hard as I’d been told it was. Anybody I know who’s been always insisted the Fiery Gizzard was the hardest, ever. It chewed hikers up and spit them out. Kinda like Davy and his turkey gizzard.

I went in there prepared to run into the Loch Ness Monster, a Yeti or the Kaiser Sose.

All the dire warnings led me to think about and prepare for worst-case scenarios.

For my solo hike, I had three liters of water, two apples, a banana, a sandwich, a tube of Clif block energy chews, five trail bars and some Chex mix. I packed a headlamp, a handheld LED light, bug spray, a first aid kit, gaiters, a printed map, a compass, a whistle, a rain poncho, two extra pairs of hiking socks and a pair of water shoes. The last hike I did carrying that much stuff was about 18 miles.

My pack weighed about 15 or 20 pounds. I wore my sturdiest high-topped hiking boots, laced up tight.

If you’re one of the three hikers left who still hasn’t downloaded the All Trails hiking app, you’re missing out. The app has topo maps for hiking trails around the world. It rates trails based on “average” hiker ability, and it rates the Fiery Gizzard loop I did as “hard.” I must be average, because I found it, in fact, hard. Not impossible, but definitely a challenge.

Way more than half of the almost 10-mile loop I did is very rocky and has a lot of roots and similar stuff to trip over. And when I say rocky, I mean picking your way over fields of small boulders, from  bowling ball to small car-size. Fortunately, the trail is exceptionally well-marked by blazes on trees. Which is critical for those long stretches with no obvious footpath and you’re depending on looking from one blaze to the next to know where to proceed.

The trail descends into the gorge, which has a “Land That Time Forgot” quality. You’re routed along the Fiery Gizzard Creek, past a big swimming hole, giant cantilevered rock formations, a collection of Hemlock trees more than 200 years old and an extra side trip to the pretty Sycamore Falls.

I got my view of that waterfall from above, on the descent.

Then it ascends on the other side of the creek. 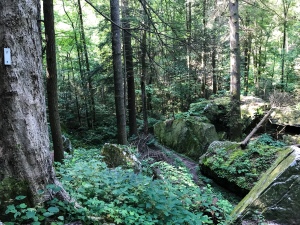 That’s where things get really extreme. Total elevation gain on the loop trail is 1,243 feet, but that climb out of the gorge to its rim is the steepest part, gaining 400 feet within four-tenths of a mile. The grade ranges from 25 percent to almost 50 percent. That’s a lot.

Up on the rim, I was grateful to be walking on relatively smooth ground–not wobbly boulders or a dry creek bed. I did opt for the half-mile side leg out to an overlook called Raven’s Point. The view is like looking out on a green Grand Canyon. I took a long break there, then I got back on the trail and completed the rest of the loop without any trouble. 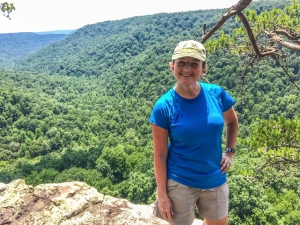 Yes, after starting at 9 a.m., I emerged uninjured, still daylight out, about 4 p.m. After recent–let’s call them “setbacks”–unsuccessful attempts to complete a hike up Cold Mountain in North Carolina and my survivalist expedition in the North Chickamauga Creek Gorge, I was on a mission in the Gizzard. I enjoyed the scenery, I shot photos, and I took food and water breaks, but I was single-minded about making good time. I may have muttered to myself more than once, “You are not going to beat me. I am going to finish this trail.”

So, after hiking it once, would I go back? Yep. I’d like to try the full, 12.5-mile, one-way trail coming out at Foster Falls. That’s a 60-foot high waterfall spilling into a one-acre swimming hole that’s 27 feet deep.

I’d like to go back this fall. The leaf color will make it a totally different experience. Don’t tell our friends up the road at Great Smoky Mountains National Park, but Backpacker also rates South Cumberland State Park as 6th-best in the country for fall color—behind leaders such as Acadia National Park in Maine, Yosemite in California and Glacier in Montana, and three spots ahead of the Smokies.

I’ve gotta go check that for myself this year.

3 responses to “Face to Face with the Fiery Gizzard”