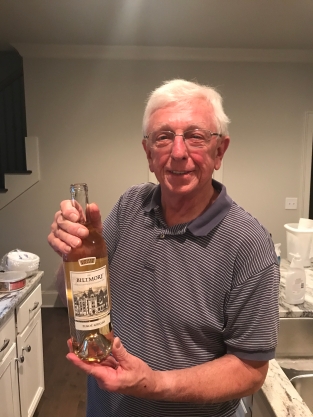 On this date in 2018, Bill, I, three cats and all our worldly belongings headed for our new life in Chattanooga. Our stressful, action-packed, 28-day sprint through the worlds of home-buying and home-selling would come to a close by sunset. Not a minute too soon.

We began the day in 2018 with one last stop by the Knoxville house we’d lived in for 24 years. To collect the cats, who’d spent their last night in Knoxville there while we stayed with Bill’s niece and nephew in Farragut.

We had a 10 a.m. closing at a title company a short distance away. The cats had to wait inside the car. Inside the building, we held our breath–fingers crossed no last-minute snag would pop up. This title company, selected by our buyer, had already dropped a ball that caused the original closing date to have to be postponed a few days. The movers who had already collected our furniture graciously agreed to hold it for no extra charge.

Thankfully, everything proceeded as planned. Until the end. When the Knoxville title agent presented us with a check for the purchase price of our house. Only they were supposed to have wired that amount to the title company in Chattanooga, where it would be applied to the purchase of a house we would complete in another three hours.

Woopsie. We’re sorry, they said. They promised to get the wire transfer going right away. Never mind that Bill and I already had been told that a bank typically has to be asked to do such about 24 hours before it is requested to happen. We reminded the title agent that had to be squared away in time for closing on our Chattanooga house in another three hours.

Outside, before we headed out, we thanked and hugged our realtor, Marcia Bartlett. We couldn’t have had a realtor more capable or better suited to us. As glad as I was to have the sale of our house finished, at last, I was sorry to say goodbye to Marcia. 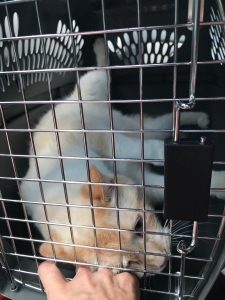 Peach doesn’t enjoy car rides-or anything else unfamiliar and not routine.

As soon as we unlocked our car doors, three confused cats began to cry periodically. My front seat had a little more room left than Bill’s, so I put the most high-maintenance of the cats, Peach, in my front passenger seat and aimed an AC vent into his crate. He settled down pretty quickly 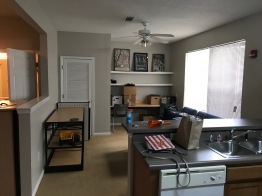 The weather was already hot and forecast to stay that way. I knew we couldn’t park outside the title company in the middle of downtown Chattanooga without windows and doors locked shut. And I knew the heat build-up would be dangerous to the cats, so I came up with a plan. We would carry them, crated, into my on-campus apartment at UTC, and let them stay there in that cool, quiet place while we went to Closing No. 2 for the day. Don’t tell anybody. Pets aren’t allowed in those apartments.

I couldn’t handle any more money wire drama, so Bill started making the calls. Finally, with 45 minutes until our close, he was assured all was in order, at last.

We headed to Chicken Salad Chick downtown, ate fast, then went to become official Hamilton County homeowners. Neither of us–nor any of our cats–had ever moved into a brand-new house, but that was what worked out for us and we were excited. Our builder was the seller, and their local honcho sent us away from closing with some useful swag–a picnic blanket, large tote and some very effective thermal coffee mugs.

We swung back by my campus apartment, picked up the cat brothers, re-loaded them into our cars, punched our home address into the GPS and headed north to Hixson. As long and stressful as the day had been for us, I think it was also pretty tough on my kitties. They were hanging in there, but really starting to fade. The only way I could keep Peach from squalling was to poke my fingers through the grate on his crate and scratch his chin or the top of his head. Soon as I stopped, he resumed yodeling.

When we unlocked our front door for the first time, at last, we were both excited and really relieved. What a day–but we made it. Furniture wouldn’t come until the next day, but that was alright.

We had debated whether to spend that night in my campus apartment–and sleep in an actual bed–or to stay put with the cats and sleep on the floor. Movers were showing up at 9 the next morning, and Hixson is about a half-hour from campus at that time of day. We opted to tough it out on the carpeted floor of an upstairs bedroom, since its windows had blinds and the master downstairs did not. At least we’d remembered to bring bed pillows and a throw. Even with carpet, though, I can tell you that a floor is pretty unforgiving.

So, with nothing on hand to eat or drink except the bottle of Pinot Grigio that Marcia had given us to celebrate the big move, and no TV, wi-fi or working phone line, we did the only thing there was to do. We googled the closest Papa John’s; punched its address into the GPS; picked up our large, thin-crust, veggies-and-pepperoni; drove back to the house; walked in; opened the wine; poured it into the clear plastic cups Marcia had also supplied; and we stood at the kitchen island and raised a glass to our new chapter.

One year ago, today.