Over the 15 months since we moved to Chattanooga, Bill and I have steadily discovered more and more of what makes this area so highly acclaimed for its outdoor offerings.

Mountains, valleys, lakes, rivers—calm and wild, it’s all here if you want to do it. And there are a whole lot of do-ers, like us. There also are a lot of people who are less do-ers than they are advocates for preserving the beautiful places that attract do-ers. Those places are called national treasures by still another group around here and, when we joined them for a recent benefit party, we knew we’d found our people.

Point Park is a 10-acre treasure on top of Lookout Mountain. In that park, all people are created equal—hikers, rock climbers, wheelchair-bound, the elderly, whomever—when it comes to taking in spectacularly beautiful scenery. You can easily drive up the mountain right to the gates of the park and walk on in. When hikers talk about whether a view can be had on a “windshield tour,” this place is a windshield tour bonanza.

It’s part of the National Park Service’s Chickamauga & Chattanooga National Military Park, and an entry fee of a few dollars is charged. The views are a bargain at any price.

Point Park’s name is derived from its northern tip—the point overlook on Lookout Mountain—on which Civil War Confederate soldiers perched confidently as the Union Army was caught below, for a time, in the city of Chattanooga. The federal soldiers’ ability to ascend and defeat Confederates on the slopes of Lookout Mountain is a stunning thing to contemplate.

No battles were fought at the Party at Point Park, but permanent placards and replica cannons positioned throughout document the place’s history.

National Public Radio affiliate WUTC-FM is a part of the UT Chattanooga Division of Communications and Marketing where I work, and I’m pleased to say that I learned about the Point Park shindig from underwriting (like advertising on commercial radio) by National Park Partners on our station. As soon as I heard about the place and the purpose, I was in.

The weather could not have been more perfect—dry and breezy as the sun was setting. Party planners clearly had thought of every detail.

A park ranger was stationed at a social media selfie site overlooking the valley. Four long tables were laden with silent auction items.

Dozens of round tables were draped with cheerful red-and-white checked tablecloths and nestled in a grove of tall, mature trees. Pulled pork, chicken and some vegetarian/tofu—this is Chattanooga, after all, where vegetarians are plentiful—versions of barbecue were served. Along with all the traditional sides and then some, and all of it buffet-style. Fruit salad, hand-dipped ice cream cones and banana pudding were the dessert options. I can vouch for the authenticity and deliciosity of the banana pudding.

Seating was unassigned, and we joined a local, Lookout Mountain-dwelling couple, seated with another local resident and the couple’s dog, which was napping inside a doggie stroller. They were warm and friendly. So was the other couple—also Lookout Mountaineers—who then joined us. For context, it’s necessary to point out that Chattanoogans who own property and live on Lookout Mountain are understood to be wealthy. Extremely so. Lots, alone, can sell for multiple millions, thanks to the million-dollar views. All five of our new friends—plus the stroller-napping Jack Russell Terrier—were engaging and delightful.

After taking in the meal, Bill and I took in more of the sights. We made a bee-line for the once-a-year opportunity to approach and be photographed on iconic Umbrella Rock. It appears to me the result of a massive rock serving as a pillar on which an almost-bigger, horizontal slab of a rock must have landed and now rests.

The park keeps it locked behind a gate 364 days a year—to protect either from personal injury or from vandalism, I guess. The party is the one day a year when the gate is unlocked, and—happy surprise!—we got our rare chance to check out Umbrella Rock and get pictures in the most perfect conditions.

It’s next to the Ochs Observatory and Museum.

That observatory—essentially a vast stone deck—offers the single-most spectacular scenic view in all of Chattanooga, in my opinion.

From that lofty perch, you can look down at Moccasin Bend, the Tennessee River Valley, Chattanooga, earth. If you can’t see at least seven states from there, I’d be surprised.

And can you guess who’s behind the Ochs name of the overlook? Yes, that would be the legendary Adolph S. Ochs. I see his name on a lot of things in Chattanooga, usually acknowledging that he founded the Chattanooga Times newspaper. Which is important and true, but it’s only a piece of his story in Tennessee.

I used to see his name on a Tennessee Historical Commission placard in Knoxville almost every day for about eight years. That’s how long I worked for the newspaper there, and a placard just outside the building noted the site of what used to be Staub’s Theater and that Arthur S. Ochs—later the publisher of the New York Times—was its first chief usher.

Ochs was born in Cincinnati before his family moved to Knoxville, where he was raised as his parents operated a struggling business in the years just after the Civil War. In 1869 and at the age of 11, Ochs began delivering papers before he learned to set lead type. Of course, he did go on to establish the Chattanooga Times, with a merger since then resulting in the Times Free Press, today’s best newspaper in Tennessee, and later he became publisher of the New York Times, one of the best newspapers in the world. I was already a fan of Ochs. The fact he made enough money in the newspaper business that he could pay to make one of Chattanooga’s most spectacular views accessible to the public—what’s not to love? 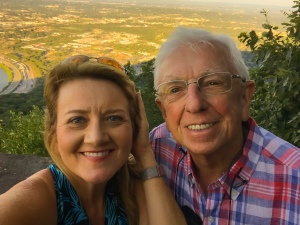 I know of two more who’ve already been multiple times in 2019 and will keep going back in 2020 and beyond.