Twenty-five years of marriage isn’t just a milestone, it’s a cause for celebration. And on our 25th anniversary last month, we celebrated in the most perfect way possible–for us. Not a party. Not a cruise. Not expensive gifts or travel to an exotic location. You might say we went “ranching.”

Over the last four or five years, we discovered a new favorite hiking trail–on the Cataloochee Divide, it’s called–in Great Smoky Mountains National Park. We would follow Cataloochee Divide from the trailhead on the Blue Ridge Parkway on the North Carolina side of the park as it wound through the woods and past open meadows up to a point called Hemphill Bald. A barbed-wire fence marks the boundary with private property along the last mile or so of the trail. The fence keeps cattle off park property and, at the bald, a stile in the fence enables hikers to easily access the private property and rest in the stunning beauty of Hemphill Bald. I think only heaven could have a better vantage point for taking in that part of the Smoky Mountains.

There is one tree, broad and tall, that provides shade and the music of breezes dancing in its leaves. A few half-exposed boulders give hikers something to sit on while they take a lunch break. A massive stone slab on a stone base and surrounded by well-worn concrete benches form a rustic picnic table. It’s what I saw years ago–a peak-finder set into the top of that table–that led us to celebrate our 25th anniversary where we did.

In addition to pointing out the visible mountaintops on the horizon, it points out “Cataloochee Ranch” sitting in the valley you gaze upon from your perch.

I’d never heard of Cataloochee Ranch before reading the name on that placard, and I made a mental note to look it up. When I did, I learned that it’s a collection of private cabins of varying size, a “ranch house” with varying overnight accommodations and a collection of horses, hiking trails and other soothing pursuits all set on an 850-acre paradise at 5,500 feet elevation. I also learned that the room and cabin rates meant we would have to wait for a very special occasion.

I couldn’t imagine a more special occasion than waking up in that place on our 25th anniversary.

From Chattanooga, we had a scenic, roughly four-hour drive along back roads, including a long stretch on the banks of the Ocoee River. We passed through Murphy, North Carolina, stopped for lunch in Bryson City and reached Maggie Valley about 3 p.m. The last turn was onto a twisting, five-mile ascent of 1,000 feet by the time it put us at the driveway to Cataloochee Ranch. 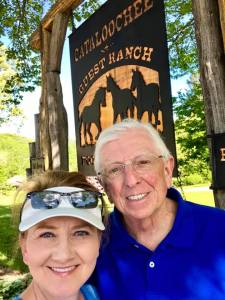 We checked in, picked up the key to our cabin for two and were told dinner was at 7–but we could come as early 6 for a cocktail. Our cabin was rustic and adorable. We sat back in the solid wood rocking chairs on its porch, took in rhododendron blossoms everywhere you looked, the rope swing under a huge oak tree next to the ranch house and a tractor parked with a flatbed wagon attached–that I would bet has gone on a few hayrides.

Occupancy was low as we were there the week before Memorial Day, and we were the only guests that night for dinner. Plus, meals are an optional add-on, and not everyone who stays there chooses to have all meals there. The server also was the cook, so I was able to directly thank the person responsible for mashed potatoes on our very first meal. Before the potatoes, she brought a fresh-tossed salad with just-made dressing. There was also oven-roasted broccoli, fresh-baked yeast rolls, fried chicken and baked cod. Then came “pecan pie cobbler.” I recommend it. In talking with our server-cook, we mentioned that blackberry cobbler–our favorite–was more common but no more delicious.

Next morning, we were joined at breakfast by three interesting and friendly couples and Judy, a granddaughter of Tom Alexander, the man who established the ranch in 1933.

Judy’s aunt, a daughter of the founder, had been our dinner hostess the night before.

Judy is a serious horse woman, with weathered hands that have held on to their share of rope, reins and saddle horns.

She was clearly in charge of the horse stables and barn, but she also was friendly, unassuming and engaging. She asked where we were from and how we’d heard of the ranch. When I told her about the peak-finder, she said her late mother would have been thoroughly pleased, as it was her idea, partly in hopes it would bring some hikers as travelers to the ranch. A couple of Judy’s stable hands came along shortly and joined us for breakfast, a variety of meats, breads, biscuits, gravy, jams, jellies and fruits.

We were fully carb-loaded for the hike up to the bald. Because they will come looking if you go missing, the ranch staff asks you to tell them your plans before you set out and to let them know when you’re back. Hemphill Bald is only about 2.5 miles UP from the ranch, so I couldn’t imagine getting lost, but it was a nice feeling that they wanted to ensure your safety.

The weather that morning had to have been God’s gift for our anniversary: sunshine, low humidity, a light breeze and the most comfortable of temperatures. No traffic to drive through, ringing phones, email to answer–just peace and quiet, interrupted at just the right times by birdsong or the swoosh of a breeze through the tall grass.

Once at the bald, we were joined by a couple of people in the role that had always found me there previously–hikers who’d come through the park. When they found out we had come from the ranch, they asked how we knew about it and we pointed out the peak-finder in the picnic table.

Back at the ranch house for dinner that night, our breakfast companions joined us again. When the server-cook brought dessert–individual dishes of fresh-baked blackberry cobbler–she winked at us and the rest of the dinner table oohed and aahed. I gave her a hug when she came back to clear the dishes.

That night, same as the previous, we put on long sleeves to take in the cool breezes on our cabin porch and the starry sky overhead. We sat back in the rocking chairs and listened to a frog chorus coming from the fishing pond about 1,000 yards away. The cabin has no air conditioner, and we slept soundly under a comforter.

The next morning after check out, off to our next adventure, we had an unexpected encounter with some of the ranch’s beautiful horses. A group occupying the gravel drive made it necessary for Bill to stop the car. Their representative approached and spent a few minutes poking his head in the windows and–I am serious–licking the hood of the car.

As we headed for the road back down the mountain, that place is so perfect that I wouldn’t have been surprised to turn back and see a horn on that horse’s forehead. It had been just that kind of a unicorn-magical way to celebrate our 25th anniversary.

One response to “Silver Celebration”